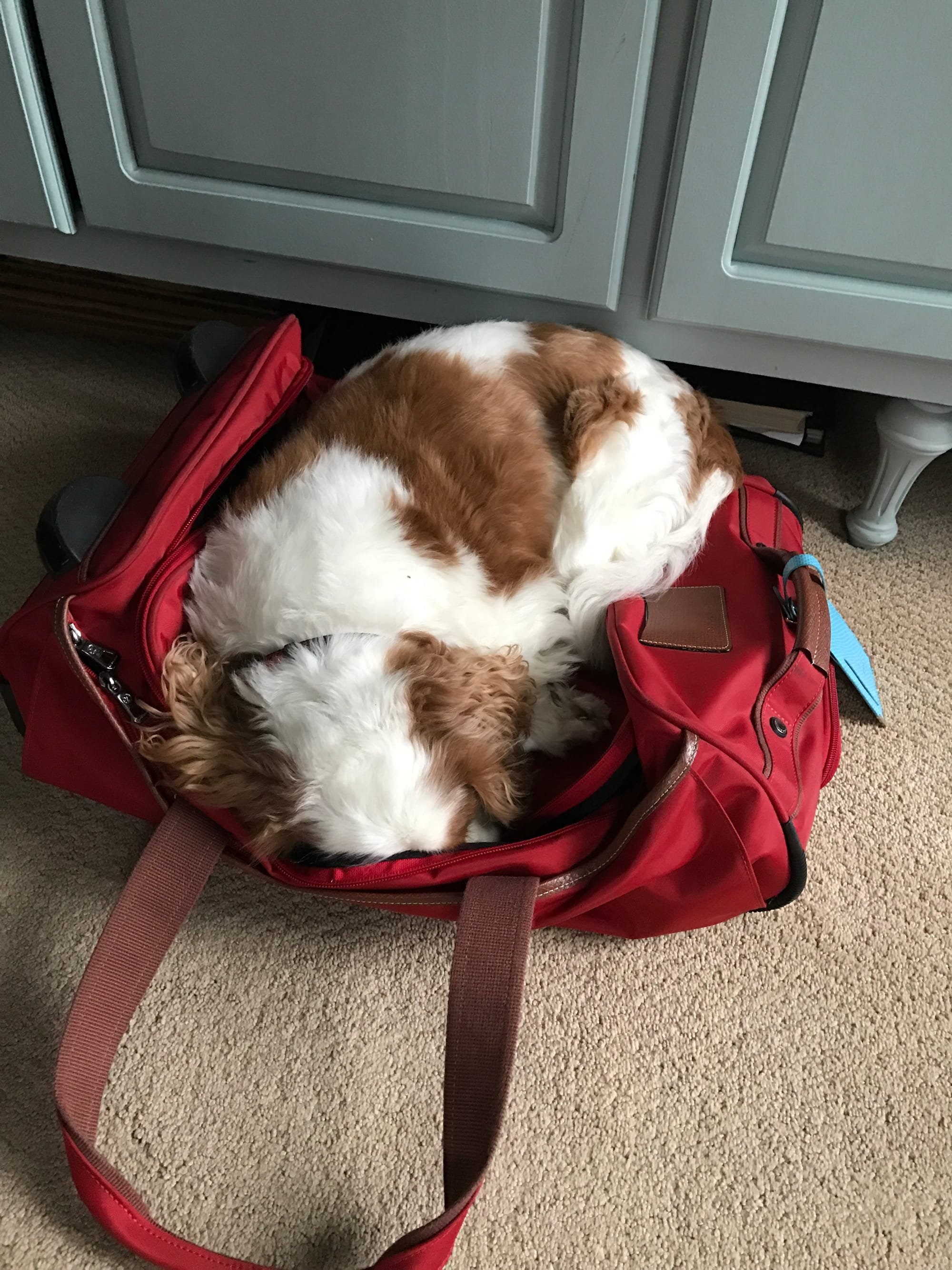 This is a blog about my very best furry friend. This last week I had to say goodbye to my fearless travel companion and the most precious puppy faced boy I ever knew. Napoleon my 11 1/2 year old King Charles Cavalier, went over the rainbow bridge as they say. I truthfully have never been so full of tears. You see Napoleon was my constant companion and travel partner. He literally had more stamps in his puppy passport than most Americans. My husband and I have had the privilege of living overseas and our darling Napoleon has gone with us. He was born in England on July 4th and we named him Napoleon....he was destined to live in America and in England and in France. He has so many adventures and truthfully I can say that French Bee Boutique would not have happened without him by my side. He has been to so many French Brocantes (like a flea market) that the people that knew me in the little villages I visited in France also new the dogs name. He would wag his long flowing tale at anyone who would speak to him....in French, in American English and in Proper English. Not all the stories I have of his adventures are sweet...once, he was almost eaten by a pack of mongrel dogs in Belguim, my friend who was with me at the time traveling said, Priscilla, all I saw was Napoleon flying into your arms for protection. Another time while I was staying in a Paris Hotel with him he could not quite make it to the dog walk area outside and proceeded to pee all the way thru the lobbie at 6 am. Oh dear, all I could think at that moment was where in the world am I gonna find a hand towel to wipe this all up. Not his fault of course the lobby was huge and he had held it all night in the room with me. He loved to ride in the car and many times he and I traveled all alone from England to France and back again using the Chunnel. People in other cars would see his darling face peaking out the window and wave and he would wag his tale back at them. Eating in France is a dream with a dog. The French love dogs and so it is normal to see them in restaurants with their owners. Laying quietly. Napoleon thought this was the finest thing ever. He loved all the attention from the waiters and normally got a little treat and they would always bring him a bowl of water. Class all the way. He also loved the English pub we used to frequent. Our local pub in England also included dogs and with his charming red coat on that he had for cold winter nights you could just see that he felt quite dapper in the pub. In America, he hated when I got the suit cases out and he knew he wasn't going....in his final years it was harder to take him...this photo is of him literally laying in my suitcase not wanted me to go without him. He would pout and whine for days leading up to my going. It was very hard to leave him. Why is it we love our animals so much?? I am sure it is because, they bring us so much joy and delight. They never talk back and they are always faithful and the unconditional love they give is a gift from their creator to us. We need it, we long for it, we don't always deserve it but they give it anyway! Napoleon was a one of kind pup and I will never forget all the joy and love and laughter he brought me, thank heaven I have the photos and the stories to bring me back to the days when he was my Faithful and I was his World.

Created with a Purpose
Flawless
You don't know you need this.....
Comments